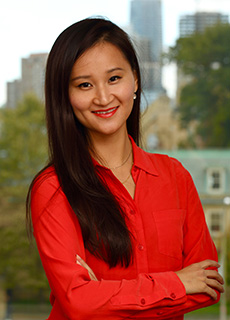 Diana Fu is associate professor of political science at The University of Toronto and director of the East Asia Seminar Series at the Asian Institute, Munk School of Global Affairs and Public Policy. She is a non-resident fellow at Brookings and a public intellectuals fellow at the National Committee on US-China Relations. She is also a member of the Royal Society of Canada’s College of New Scholars, Artists, and Scientists.
Her research examines popular contention, state control, civil society, and authoritarian citizenship, with a focus on contemporary China. She is author of the award-winning book “Mobilizing Without the Masses: Control and Contention in China” (2018, Cambridge University Press and Columbia Weatherhead Series). Based on political ethnography inside labor organizations, it uncovers how China’s migrant workers organized for rights without protesting en masse. It received best book awards from American Political Science Association Association, the American Sociological Association, and the International Studies Association. Her articles have appeared in Comparative Political Studies (co-winner of the 2017 best article in CPS), Governance (winner of the 2019 American Sociological Association’s Distinguished Scholarly Article Award), Modern China, Perspectives on Politics, and The China Journal.
Dr. Fu’s research and commentary on Chinese politics have appeared in BBC World Service, Bloomberg TV, CBC, Foreign Affairs, Foreign Policy, Reuters, US News & World Report, The Economist, The Financial Times, The Globe & Mail, and The New York Times, among others. She was a television host and scriptwriter for the TVO documentary series, “China Here and Now.”
She holds a D.Phil. in Politics and an M.Phil. in Development Studies with distinction from Oxford University, where she studied as a Rhodes Scholar. She is currently serving as National Co-secretary of the Rhodes Scholarship for China. She previously held fellowships at Stanford University and the Massachusetts Institute of Technology. She enjoys Latin dance and creative writing.