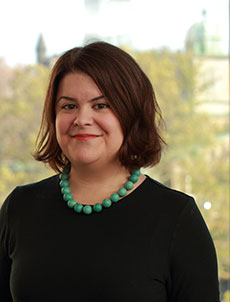 Emily Nacol is a political theorist whose research interests lie primarily in early modern political thought and political economy. She works primarily on problems of risk and uncertainty in early modernity. Her first book, An Age of Risk: Politics and Economy in Early Modern Britain was published in 2016, and she has published articles and chapters on Mandeville, Locke, and risk discourses. Her current projects include a new book on representations of labor and risk in eighteenth-century Britain and a series of shorter pieces on risk and politics. She has held research fellowships at Brown University’s Political Theory Project and the Cornell University Society for the Humanities. Her teaching interests include a range of courses in the history of political thought as well as thematic courses on capitalism, commerce and risk.