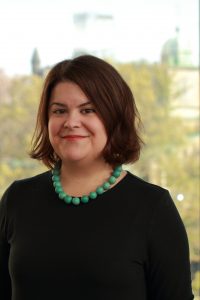 Congratulations to Political Scientist Emily Nacol who has been awarded a Jackman Humanities Institute (JHI) Research Fellowship (2022 – 2023). Research Fellows are University of Toronto tenured faculty members by the time of their fellowship, chosen for their distinction in achievements relative to their career stage, the excellence of their proposed project, and its relation to the annual theme for 2022 – 2023, Labour.

The fellowship will support her latest research project Reimagining Labour: The Politics of Risk and Blame in Early Modern Britain. Of the fellowship Professor Nacol said: “This fellowship will support the research and writing of my second book, which will focus on social and political arguments about the risks and value of labour and work as they appear in early modern British political and economic writing in the long eighteenth century (ca. 1688-1815). I am interested in how particular forms of labour become established as both morally and materially productive and desirable, while others are marked as destructive and threatening to social order and prosperity. Phrased in the language of my thematic research agenda on the politics of risk, I want to analyse how and why some forms of labour and some labourers themselves become designated as risky, while others do not. Close study of these risk designations can, I argue, illuminate the social and political commitments – and fears – that shape the societies in which labourers perform their work. To capture these dynamics, as a scholar of early modern political thought and political economy, I turn to representations of distinct but sometimes overlapping groups of labourers in eighteenth-century Britain: prostitutes, low-level workers on the stock market, the working and non-working poor, and migrant labourers. While my research is historical and interpretive in character, I remain cognizant of how these dynamics play out, albeit in new ways, in contemporary political debates about labour and work. We, too, classify some forms of work as more desirable or valuable than others, and in our own labour-centric political economies, we place moral and social value on productivity and deal harshly with those deemed unproductive.”

Emily (Ph.D. 2007, University of Chicago) is an Associate Professor of Political Science and author of An Age of Risk: Politics and Economy in Early Modern Britain (Princeton University Press, 2016). As a political theorist who specializes in the history of early modern political thought and political economy, Emily studies how early modern people coped with the problems of risk and uncertainty in political, social, and economic life. Her current research project explores shifting attitudes towards labour and risk in Britain in the long eighteenth century, with special attention to how Britons conceptualized and singled out certain types of workers as particularly risky and undesirable (e.g., prostitutes, new finance workers, and the labouring poor). Her work aims to understand how these risky designations—found in political, economic, and legal discourse, as well as in literary works and material culture—aimed to soothe public anxieties about the changing nature of labour in a new finance economy and to shore up traditional accounts of labour and work. She is interested, too, in how these designations further burdened already vulnerable, marginalized workers. In addition to An Age of Risk, Emily has published book chapters and articles on the political thought of John Locke and on the impact of insurance practices on early modern political writing.