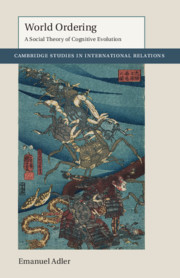 Drawing on evolutionary epistemology, process ontology, and a social-cognition approach, this book suggests cognitive evolution, an evolutionary-constructivist social and normative theory of change and stability of international social orders. It argues that practices and their background knowledge survive preferentially, communities of practice serve as their vehicle, and social orders evolve. As an evolutionary theory of world ordering, which does not borrow from the natural sciences, it explains why certain configurations of practices organize and govern social orders epistemically and normatively, and why and how these configurations evolve from one social order to another. Suggesting a multiple and overlapping international social orders’ approach, the book uses three running cases of contested orders – Europe’s contemporary social order, the cyberspace order, and the corporate order – to illustrate the theory. Based on the concepts of common humanity and epistemological security, the author also submits a normative theory of better practices and of bounded progress.