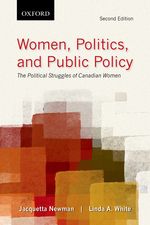 The second edition of Women, Politics, and Public Policy incorporates uniquely Canadian perspectives on the intersectionality of feminism, women’s politics, and public policy-making. After outlining historical contexts and the foundations of feminist theory, the text examines topical, practical issues, offering an approach that is well-suited to both novices and advanced learners. Extensively updated and revised, this comprehensive volume is an essential tool for examining and understanding the many aspects of women’s political activity and its relationship to public policy and social change.