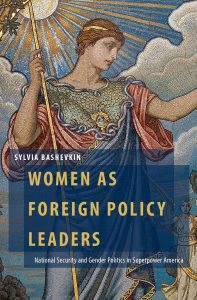 What difference does gender make to foreign diplomacy? What do we know about women’s participation as decision-makers in international affairs? Is it fair to assume, as many observers do, that female elites will mirror the relatively pacifist preferences of women in the general public as well as the claims of progressive feminist movements? And, of particular importance to this book, what consequences follow from the appointment of “firsts” to these posts? Inspired by recent work in the field of feminist diplomatic history, this book offers the first comparative examination of women’s presence in senior national security positions in the United States executive branch.

Sylvia Bashevkin looks at four high-profile appointees in the United States since 1980: Jeane Kirkpatrick during the Reagan years, Madeleine Albright in the Clinton era, Condoleezza Rice during the George W. Bush presidency, and Hillary Rodham Clinton in the first Obama mandate. Bashevkin explores the extent to which each of these women was able to fully participate in a domain long dominated by men, focusing in particular on the extent to which each shaped foreign policy in meaningful ways. She looks particularly at two specific phenomena: first, the influence of female decision-makers, notably their ability to make measurable difference to the understanding and practice of national security policy; and second, leaders’ actions with respect to matters of war and women’s rights. The track records of these four women reveal not just a consistent willingness to pursue muscular, aggressive approaches to international relations, but also widely divergent views about feminism. Women as Foreign Policy Leaders shows how Kirkpatrick, Albright, Rice, and Clinton staked out their presence on the international scene and provided a crucial antidote to the silencing of women’s voices in global politics.