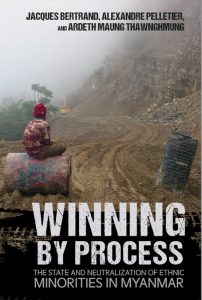 Winning by Process: The State and Neutralization of Ethnic Minorities in Myanmar

Winning by Process asks why the peace process stalled in the decade from 2011 to 2021 despite a liberalizing regime, a national ceasefire agreement, and a multilateral peace dialogue between the state and ethnic minorities.

Winning by Process argues that stalled conflicts are more than pauses or stalemates. “Winning by process,” as opposed to winning by war or agreement, represents the state’s ability to gain advantage by manipulating the rules of negotiation, bargaining process, and sites of power and resources. In Myanmar, five such strategies allowed the state to gain through process: locking in, sequencing, layering, outflanking, and outgunning. The Myanmar case shows how process can shift the balance of power in negotiations intended to bring an end to civil war. During the last decade, the Myanmar state and military controlled the process, neutralized ethnic minority groups, and continued to impose their vision of a centralized state even as they appeared to support federalism.