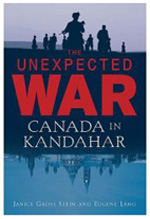 The Unexpected War: Canada in Afghanistan

With our troops now committed until 2009, The Unexpected War exposes the poverty of Canadian foreign policy, arguing that Canada’s various military missions in Afghanistan have been ad hoc in nature and made on the basis of political calculations — often flawed — about Canadian-American relations. Drawing upon interviews with key decision makers and advisors, and a first-hand account by a former Defence Ministry insider, the book offers a gripping account of how Canada became embroiled in a new kind of war — fighting insurgency in a failed state. Winner of the 2007 Shaughnessy Cohen Prize and shortlisted for the 2007 Donner Prize.