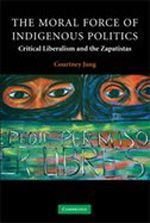 The Moral Force of Indigenous Politics

Tracing the political origins of the Mexican indigenous rights movement, from the colonial encounter to the Zapatista uprising, and from Chiapas to Geneva, Courtney Jung locates indigenous identity in the history of Mexican state formation. She argues that indigenous identity is not an accident of birth but a political achievement that offers a new voice to many of the world’s poorest and most dispossessed. The moral force of indigenous claims rests not on the existence of cultural differences, or identity, but on the history of exclusion and selective inclusion that constitutes indigenous identity. As a result, the book shows that privatizing or protecting such groups is a mistake and develops a theory of critical liberalism that commits democratic government to active engagement with the claims of culture. This book will appeal to scholars and students of political theory, philosophy, sociology, and anthropology studying multiculturalism and the politics of culture.