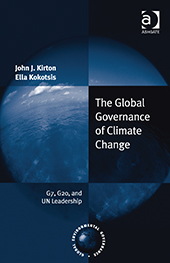 Failed efforts, centred in the United Nations, to allocate responsibility for climate change have resulted in a challenge now reaching crisis stage. Kirton and Kokotsis analyze the generation and effectiveness of four decades of intergovernmental regimes for controlling global climate change. They trace the global governance of climate change from its 1970s origins to the present and demonstrate the effectiveness of the plurilateral summit alternative grounded in the G7/8 and the G20.

– G7/8 and UN competition and convergence on governing climate change

– Kyoto obligations and the post-Kyoto regime

– Projections of and prescriptions for an effective global climate change control regime for the twenty-first century.

This topical book synthesizes a rich array of empirical data, including new interview and documentary material about G7/8 and G20 governance of climate change, and makes a valuable contribution to understanding the dynamics of governing climate change. It will appeal to scholars, researchers, and policy makers interested in the dynamics behind governance processes within the intergovernmental realm.