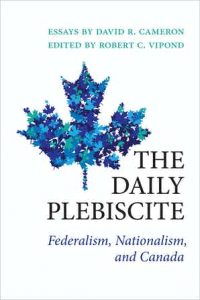 From the mid-1960s through the mid-1990s, Canada was in a state of ongoing political crisis. Within this thirty-year period, David R. Cameron was an active participant and observer of Canada’s crisis of national unity. As a political scientist and former senior public servant, Cameron remains one of the most astute and respected analysts of Canadian federalism.

This volume assembles some of Cameron’s best works on federalism, nationalism, and the constitution, including journal articles, book chapters, speeches, newspaper op-eds, and unpublished opinion pieces spanning nearly fifty years of engagement. In addition, The Daily Plebiscite includes a conversation between Cameron and Robert C. Vipond on the “long decade” of the 1980s in Canadian constitutional politics, a brief history of the mega-constitutional era, and concluding reflections on the broader lessons that other divided societies might take from the Canadian experience.

Providing rich fare for anyone interested in questions of federalism, nationalism, and constitutionalism, The Daily Plebiscite offers an informed, insider’s perspective on the national unity question and considers the challenges faced by a federal, multinational, and multicultural country like Canada.