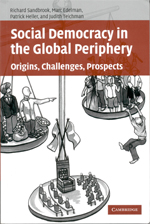 Social Democracy in the Global Periphery focuses on social-democratic regimes in the developing world that have, to varying degrees, reconciled the needs of achieving growth through globalized markets with extensions of political, social and economic rights. The authors show that opportunities exist to achieve significant social progress, despite a global economic order that favours core industrial countries. Their findings derive from a comparative analysis of four exemplary cases: Kerala (India), Costa Rica, Mauritius and Chile (since 1990). Though unusual, the social and political conditions from which these developing-world social democracies arose are not unique; indeed, pragmatic and proactive social-democratic movements helped create these favourable conditions. The four exemplars have preserved or even improved their social achievements since neoliberalism emerged hegemonic in the 1980s. This demonstrates that certain social-democratic policies and practices – guided by a democratic developmental state – can enhance a national economy’s global competitiveness.