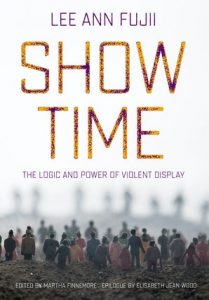 Show Time: The Logic and Power of Violent Display

In Show Time, Lee Ann Fujii asks why some perpetrators of political violence, from lynch mobs to genocidal killers, display their acts of violence so publicly and extravagantly. Closely examining three horrific and extreme episodes—the murder of a prominent Tutsi family amidst the genocide in Rwanda, the execution of Muslim men in a Serb-controlled village in Bosnia during the Balkan Wars, and the lynching of a twenty-two-year old Black farmhand on Maryland’s Eastern Shore in 1933—Fujii shows how “violent displays” are staged to not merely to kill those perceived to be enemies or threats, but also to affect and influence observers, neighbors, and the larger society.

Watching and participating in these violent displays profoundly transforms those involved, reinforcing political identities, social hierarchies, and power structures. Such public spectacles of violence also force members of the community to choose sides—openly show support for the goals of the violence, or risk becoming victims, themselves. Tracing the ways in which public displays of violence unfold, Show Time reveals how the perpetrators exploit the fluidity of social ties for their own ends.