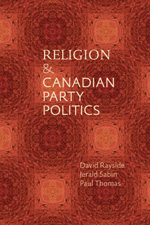 Religion is usually thought of as inconsequential to contemporary Canadian politics. Religion and Canadian Party Politics takes a hard look at just how much or how little influence faith continues to have in federal, provincial, and territorial political arenas.

Drawing on case studies from across the country, this book explores the three axes of religiously based contention that have been most influential in Canada. Historically, denominational distinctions between Catholics and Protestants shaped party oppositions across several regions. Since the 1960s, as religiosity experienced a steep decline, a newly politicized divide opened between religious conservatives and political reformers. Then since the 1990s, sporadic controversy has centred on the political and legal recognition of non-Christian religious minority rights. Although the extent of partisan engagement with each of these sources of contention has varied across time and region, this book shows that religion still matters in shaping party politics.

This detailed look at the play of religiously based conflict and accommodation in Canada fills a large gap and pulls us back from overly simplified comparisons with the United States.
More broadly, this book also compares the role of faith in politics in Canada to that of other Western industrialized societies.