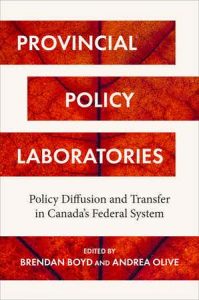 Canada’s federal system, composed of ten provincial governments and three territories, all with varying economies and political cultures, is often blamed for the country’s failure to develop coordinated policy responses to key issues. But in other federal and multi-level governance systems, the ability of multiple governments to test a variety of policy responses has been lauded as an effective way to build local and national policy.

Despite high-profile examples of policy diffusion in Canada, there has been surprisingly little academic study of policy learning and diffusion among provinces. Featuring cutting-edge research, Provincial Policy Laboratories explores the cross-jurisdictional movement of policies among governments in Canada’s federal system. The book comprises case studies from a range of emerging policy areas, including parentage rights, hydraulic fracturing regulations, species at risk legislation, sales and aviation taxation, and marijuana regulation. Throughout, the contributors aim to increase knowledge about this understudied aspect of Canadian federalism and contribute to the practice of intergovernmental policymaking across the country.