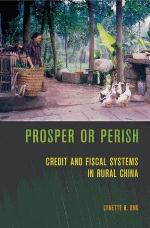 Prosper or Perish: Credit and Fiscal Systems in Rural China

The official banking institutions for rural China are Rural Credit Cooperatives (RCCs). Although these co-ops are mandated to support agricultural development among farm households, since 1980 half of RCC loans have gone to small and medium-sized industrial enterprises located in, and managed by, townships and villages. These township and village enterprises have experienced highly uneven levels of success, and by the end of the 1990s, half of all RCC loans were in or close to default, forcing China’s central bank to bail out RCCs. In Prosper or Perish, Lynette H. Ong examines the bias in RCC lending patterns, focusing on why the mobilization of rural savings has contributed to successful industrial development in some locales but not in others.

Interweaving insightful and theoretically informed discussions of rural credit, development, governance, and bank bailouts, Ong identifies various sources for China’s uneven development. In the highly decentralized fiscal environment of the People’s Republic, successful industrialization has significant implications for rural governance. Local governments depend on revenue from industrial output to provide public goods and services; unsuccessful enterprises starve local governments of revenue and result in radical cutbacks in services. High peasant burdens, land takings without adequate compensation by local governments, and other poor governance practices tend to be associated with unsuccessful industrialization. In light of the recent liberalization of the rural credit sector in China, Prosper or Perish makes a significant contribution to debates within political science, economic development, and international banking.