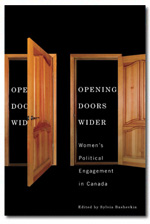 From the days of the fur trade through the contemporary period, women have played important roles in the public life of Canada. Until the 1970s, however, these contributions were generally overlooked. Opening Doors Wider looks at the progress made in the last forty years to raise the profile of women’s involvement in public life.

The contributors focus on two questions with reference to community activism, the politics of feminist organizing, parties and elections, and the communications environment in which politicians operate. First, are the doors to participation presently open wider than they were in the past? What obstacles as well as possibilities face specific groups of female citizens? Have patterns of media coverage shifted such that women can expect to engage in community groups and party organizations on something approaching an even playing field? Second, how can these doors be opened wider, both in terms of real-world participation and our scholarly understanding of public engagement? What remedies have been proposed? What research directions need to be pursued?

The tightly argued essays shed new light on the quality of public involvement of women in one of the world’s most stable democracies. The nuanced discussion of solutions as well as problems makes this book an indispensable resource for students and practitioners of politics at all levels.