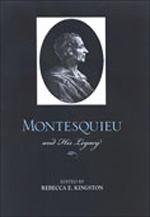 Montesquieu and His Legacy

Montesquieu (1689-1755) is regarded as one of the most important thinkers of the Enlightenment. His Lettres persanes and L’Esprit des lois have been read by students and scholars throughout the last two centuries. While many have associated Montesquieu with the doctrine of the “separation of powers” in the history of ideas, Rebecca E. Kingston brings together leading international scholars who for the first time present a systematic treatment and discussion of the significance of his ideas more generally for the development of Western political theory and institutions. In particular, Montesquieu and His Legacy supplements the conventional focus on the institutional teachings of Montesquieu with attention to the theme of morals and manners. The contributors provide commentary on the broad legacy of Montesquieu’s thought in past times as well as for the contemporary era.