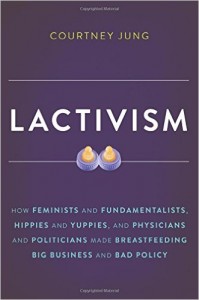 Lactivism – How Feminists and Fundamentalists, Hippies and Yuppies, and Physicians and Politicians Made Breastfeeding Big Business and Bad Policy

Social scientist and mother Courtney Jung explores the ever-expanding world of breastfeeding advocacy, shining a new light on the diverse communities who compose it, the dubious science behind it, and the pernicious public policies to which it has given rise

Is breast really best? Breastfeeding is widely assumed to be the healthiest choice, yet growing evidence suggests that its benefits have been greatly exaggerated. New moms are pressured by doctors, health officials, and friends to avoid the bottle at all costs—often at the expense of their jobs, their pocketbooks, and their well-being.

In Lactivism, political scientist Courtney Jung offers the most deeply researched and far-reaching critique of breastfeeding advocacy to date. Drawing on her own experience as a devoted mother who breastfed her two children and her expertise as a social scientist, Jung investigates the benefits of breastfeeding and asks why so many people across the political spectrum are passionately invested in promoting it, even as its health benefits have been persuasively challenged. What emerges is an eye-opening story about class and race in America, the big business of breastfeeding, and the fraught politics of contemporary motherhood.