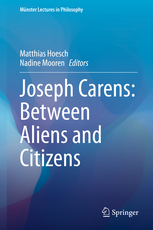 Joseph Carens: Between Aliens and Citizens

This book offers a critical discussion of Joseph Carens’s main works in migration ethics covering themes such as migration, naturalization, citizenship, culture, religion and economic equality. The volume is published on the occasion of the annual Münster Lectures in Philosophy held by Joseph Carens in the fall of 2018. It documents the intellectual exchange with the well-known philosopher Joseph Carens by offering critical contributions on Carens’s work and commentaries of Carens as a reply to these critical contributions. With his various works on migration ethics, Joseph Carens must be seen as one of the leading academics in the political and ethical discourse of migration in the last years. The topic of migration raises questions not only regarding naturalization and citizenship but also cultural, economic and religious differences between aliens, citizens and persons whose status lies in between and calls for further determination. Such questions gain more and more importance in our globalized world as can be seen for example in the context of the refugee crisis in the European Union and the U.S.

The book covers different systematic topics of Carens’s work as can be found in his widely read book “The Ethics of Immigration” but also in further publications. It provides papers with critical discussions of Carens’s work as well as his responses to these, thus enabling and documenting the fruitful dialogue between the contributors and Carens himself. The aim of this book is to sharpen and shed light on Carens’s arguments concerning migration by offering new and critical perspectives and fine-grained analyses.