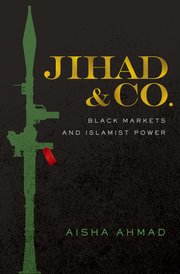 For two decades, militant jihadism has been one of the world’s most pressing security crises. In civil wars and insurgencies across the Muslim world, certain Islamist groups have taken advantage of the anarchy to establish political control over a broad range of territories and communities. In effect, they have built radical new jihadist proto-states.

Why have some ideologically-inspired Islamists been able to build state-like polities out of civil war stalemate, while many other armed groups have failed to gain similar traction? What makes jihadists win? In Jihad & Co., Aisha Ahmad argues that there are concrete economic reasons behind Islamist success. By tracking the economic activities of jihadist groups in Afghanistan, Somalia, Pakistan, Mali, and Iraq, she uncovers an unlikely actor in bringing Islamist groups to power: the local business community.

To illuminate the nexus between business and Islamist interests in civil war, Ahmad journeys into war-torn bazaars to meet with both jihadists and the smugglers who financed their rise to power. From the arms markets in the Pakistani border region to the street markets of Mogadishu, their stories reveal a powerful economic logic behind the rise of Islamist power in civil wars. Behind the fiery rhetoric and impassioned, ideological claims is the cold, hard cash of the local war economy. Moving readers back and forth between mosques, marketplaces, and battlefields, Ahmad makes a powerful argument that economic savvy, as much as ideological fervor, explains the rise of militant jihadism across the modern Muslim world.