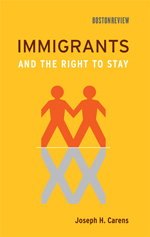 Immigrants and the Right to Stay

The Obama administration promises to take on comprehensive immigration reform in 2010, setting policymakers to work on legislation that might give the approximately eleven million undocumented immigrants currently living in the United States a path to legalization of status. Commentators have been quick to observe that any such proposal will face intense opposition.
Few issues have so divided the country in recent years as immigration. Immigrants and the Right to Stay brings the debate into the realm of public reason. Political theorist Joseph Carens argues that although states have a right to control their borders, the right to deport those who violate immigration laws is not absolute. With time, immigrants develop a moral claim to stay. Emphasizing the moral importance of social membership, and drawing on principles widely recognized in liberal democracies, Carens calls for a rolling amnesty that gives unauthorized migrants a path to regularize their status once they have been settled for a significant period of time.
After Carens makes his case, six experts from across the political spectrum respond. Some protest that he goes too far; others say he does not go far enough in protecting the rights of migrants. Several raise competing moral claims and others help us understand how the immigration problem became so large. Carens agrees that no moral claim is absolute, and that, on any complex public issue, principled debate involves weighing competing concerns. But for him the balance falls clearly on the side of amnesty.