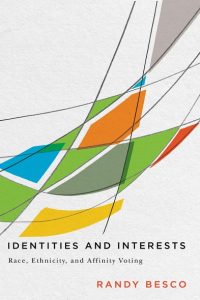 The electoral behaviour of racialized voters and politicians has captured little attention outside the United States.

Identities and Interests offers an entirely new perspective on the role of racial and ethnic identities in Canadian elections. Randy Besco combines survey, candidate, and census data with a series of experiments to show that ethnic self-identification matters far more than self-interest, ideology, or policy. The largest minority groups – Chinese and South Asian Canadians – tend to support candidates of their own ethnicity. Yet inter-minority affinity voting also reveals the potential for “rainbow coalitions” and how minorities themselves think in terms of a white/non-white divide.

Identities and Interests gets to the heart of our understanding of democracy and citizenship. While identity politics are often considered problematic for democratic debate, Besco distinguishes between pure in-group bias and the positive effects stemming from affinity voting and calls for a more nuanced evaluation of the role of identity in politics. Overall, his findings have major implications for social movements, issue opinions, fundraising, and political leadership races.

In an age of increasing multiculturalism and rising racial tension, scholars and students of political science will find this book a compelling read, as will professionals working in the political sphere.