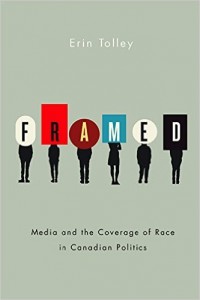 Framed: Media and the Coverage of Race in Canadian Politics

Framed is a wake-up call for those who think that race does not matter in Canada. Pushing the field of Canadian political science in new directions, this groundbreaking work combines an empirical analysis of print media with in-depth interviews of elected officials, former candidates, political staffers, and journalists to reveal the connections between race, media coverage, and politics in Canada.

As Erin Tolley shows, overt racism rarely occurs on the pages of Canadian newspapers, but assumptions about race and diversity often influence media coverage. Consequently, as reporters go about selecting which political issues and events to cover, who to quote, and how to frame stories to make them resonate with the public, they give visible minorities less prominent and more negative media coverage than their white counterparts. Further, visible minority politicians are more likely to be portrayed as products of their socio-demographic backgrounds, as uninterested in pressing policy issues, and as less electorally viable. The resulting news coverage weakens Canada’s commitment to a robust, inclusive democracy.

The problem is systemic, but Tolley offers recommendations to politicians, pundits, journalists, and the public for challenging the racial assumptions that underpin news coverage. By drawing attention to the ways in which race continues to matter, this book provides a new foundation for thinking about diversity and equality in Canada.