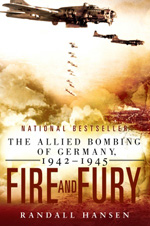 An enlightening and utterly convincing re-examination of the allied aerial bombing campaign and of civilian German suffering during World War II–an essential addition to our understanding of world history.

During the Second World War, Allied air forces dropped nearly two million tons of bombs on Germany, destroying some 60 cities, killing more than half a million German citizens, and leaving 80,000 pilots dead. Much of the bombing was carried out against the expressed demands of the Allied military leadership. Hundreds of thousands of people died needlessly.

Focusing on the crucial period from 1942 to 1945, and using a compelling narrative approach, Fire and Fury tells the story of the American and British bombing campaign through the eyes of those involved: military and civilian command in America, Britain, and Germany, aircrew in the sky, and civilians on the ground.

Acclaimed historian Randall Hansen shows that the Commander-in-Chief of Bomber Command, Arthur Harris, was wedded to an outdated strategy whose success had never been proven; how area bombing not only failed to win the war, it probably prolonged it; and that the US campaign, which was driven by a particularly American fusion of optimism and morality, played an important and largely unrecognized role in delivering Allied victory.

Among other honours this national bestseller was nominated for the 2009 Governor General’s Literary Award in non-fiction.