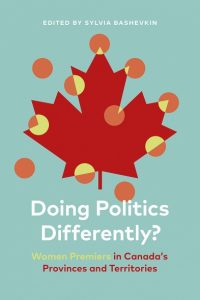 Women have reached the highest levels of political office in Canada’s provinces and territories, but what difference – if any – has their rise to the top made? Have they changed the content, tone, or style of political debate? What role has gender played in their triumph and defeat?

In Doing Politics Differently? leading researchers from across the country assess the track records of eleven premiers, including their impact on policies of particular interest to women and their influence on the tenor of legislative debate and the recruitment of other women as party candidates, cabinet ministers, and senior bureaucrats.

From Catherine Callbeck in Prince Edward Island to Christy Clark in British Columbia to Eva Aariak in Nunavut, Canada stands out for the variety and number of women who have reached the top. By comparing the performance of women premiers across the country and by evaluating their records in light of the men who preceded and succeeded them, this innovative volume asks how important demographic diversity is to government decision making.

This book will appeal to both students and scholars of Canadian politics, history, and gender studies, and is an accessible read for anyone interested in women’s political and social status.