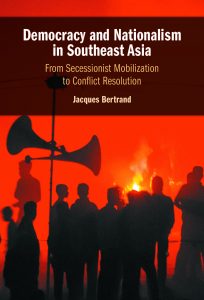 Democracy and Nationalism in Southeast Asia: From Secessionist Mobilization to Conflict Resolution

Jacques Bertrand offers a comparative-historical analysis of five nationalist conflicts over several decades in Southeast Asia. Using a theoretical framework to explain variance over time and across cases, he challenges and refines existing debates on democracy’s impact and shows that, while democratization significantly reduces violent insurgency over time, it often introduces pernicious effects that fail to resolve conflict and contribute to maintaining deep nationalist grievances. Drawing on years of detailed fieldwork, Bertrand analyses the paths that led from secessionist mobilization to a range of outcomes. These include persistent state repression for Malay Muslims in Thailand, low level violence under a top-down ‘special autonomy’ for Papuans, reframing of mobilizing from nationalist to indigenous peoples in the Cordillera, a long and broken path to an untested broad autonomy for the Moros and relatively successful broad autonomy for Acehnese.