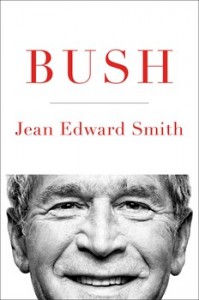 Distinguished presidential biographer Jean Edward Smith offers a critical yet fair biography of George W. Bush, showing how he ignored his advisors to make key decisions himself—most disastrously in invading Iraq—and how these decisions were often driven by the President’s deep religious faith.

George W. Bush, the forty-third president of the United States, almost singlehandedly decided to invade Iraq. It was possibly the worst foreign-policy decision ever made by a president. The consequences dominated the Bush Administration and still haunt us today.

In Bush, “America’s greatest living biographer” (George Will), Jean Edward Smith, demonstrates that it was not Dick Cheney, Donald Rumsfeld, or Condoleezza Rice, but President Bush himself who took personal control of foreign policy. Bush drew on his deep religious conviction that important foreign-policy decisions were simply a matter of good versus evil. Domestically, he overreacted to 9/11 and endangered Americans’ civil liberties.

Smith explains that it wasn’t until the financial crisis of 2008 that Bush finally accepted expert advice, something that the “Decider,” as Bush called himself, had previously been unwilling to do. As a result, he authorized decisions that saved the economy from possible collapse, even though some of those decisions violated Bush’s own political philosophy.

Bush is a comprehensive evaluation of the Bush presidency—including Guantanamo, Katrina, No Child Left Behind, and other important topics—that will surely surprise many readers. Controversial, incisive, and compelling, it is thoroughly researched and sure to add to the debate over Bush’s presidential legacy.