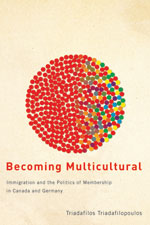 Becoming Multicultural: Immigration and the Politics of Membership in Canada and Germany

In a world of nation-states, international migration raises questions of membership: Should foreigners be admitted to the national space? If so, according to what criteria and for what ends? And should they and their children be granted citizenship? Canada’s and Germany’s responses to these questions during the first half of the twentieth century consisted of discriminatory immigration and citizenship policies aimed at harnessing migration for economic ends while minimizing its costs. Yet, by the end of the century, the admission, settlement, and incorporation of previously excluded groups had transformed both countries into highly diverse multicultural societies.
Becoming Multicultural explains how this remarkable shift came about. Triadafilopoulos argues that world-historical events and epoch-defining processes — including the Holocaust, decolonization, and the emergence of global human rights culture — gave rise to a markedly different normative context after the Second World War. These changes in global norms made the maintenance of established membership regimes difficult to defend, opening the way for the liberalization of Canada’s and Germany’s immigration and citizenship policies.
Combining sophisticated theoretical reflection and careful empirical analysis, this thought-provoking book sheds light on the dynamics of membership politics and policy making in contemporary liberal-democratic countries.