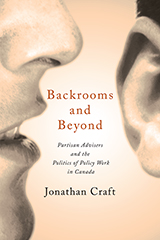 Backrooms and Beyond: Partisan Advisors and the Politics of Policy Work in Canada

Though they serve in many roles and under many titles, no one doubts that political staffs now wield substantial influence in the making of government policy. Backrooms and Beyond draws on interviews with ministers, senior public servants, and political advisers to offer the first detailed Canadian treatment of how that influence is gained and exercised in the policy making process.

A comparative analysis of case studies from three Canadian jurisdictions, including the federal Prime Minister’s Office, two premier’s offices, and ministers’ offices, the book presents a detailed account of partisan advisers’ involvement in policy work and a new theoretical framework for understanding this work and its impact. As Jonathan Craft shows, partisan advisers often engage in policy work with public servants, outside stakeholders, and often in types of policy work that public servants cannot.

Backrooms and Beyond is a rich and rigorous look at an important aspect of contemporary Canadian politics, essential reading for scholars and practitioners, journalists, students of the Westminster system from around the world, and those wanting to understand just how policy is made today.