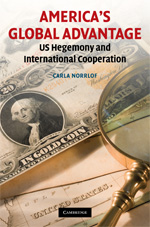 For over sixty years the United States has been the largest economy and most powerful country in the world. However, there is growing speculation that this era of hegemony is under threat as it faces huge trade deficits, a weaker currency, and stretched military resources. America’s Global Advantage argues that, despite these difficulties, the US will maintain its privileged position. In this original and important contribution to a central subject in International Relations, Carla Norrlof challenges the prevailing wisdom that other states benefit more from US hegemony than the United States itself. By analyzing America’s structural advantages in trade, money, and security, and the ways in which these advantages reinforce one another, Norrlof shows how and why America benefits from being the dominant power in the world. Contrary to predictions of American decline, she argues that American hegemony will endure for the foreseeable future.