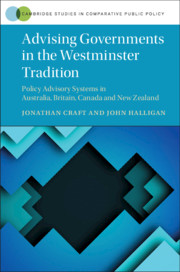 In turbulent environments and unstable political contexts, policy advisory systems have become more volatile. The policy advisory system in Anglophone countries is composed of different types of advisers who have input into government decision making. Government choices about who advises them varies widely as they demand contestability, greater partisan input and more external consultation. The professional advice of the public service may be disregarded. The consequences for public policy are immense depending on whether a plurality of advice works effectively or is derailed by narrow and partisan agendas that lack an evidence base and implementation plans. The book seeks to addresses these issues within a comparative country analysis of how policy advisory systems are constituted and how they operate in the age of instability in governance and major challenges with how the complexity policy issue can be handled.