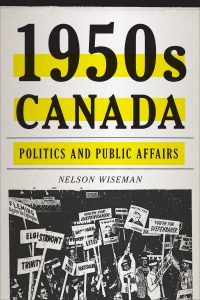 While the 1950s in Canada were years of social conformity, it was also a time of political, economic, and technological change. Against a background of growing prosperity, federal and provincial politics became increasingly competitive, intergovernmental relations became more contentious, and Canada’s presence in the world expanded. The life expectancy of Canadians increased as the social pathologies of poverty, crime, and racial, ethnic, and gender discrimination were in retreat.

1950s Canada illuminates the fault lines around which Canadian politics and public affairs have revolved. Chronicling the themes and events of Canadian politics and public affairs during the 1950s, Nelson Wiseman reviews social, economic, and cultural developments during each year of the decade, focusing on developments in federal politics, intergovernmental relations, provincial affairs, and Canada’s role in the world. The book examines Canada’s subordinate relationship first with Britain and then the United States, the interplay between Quebec’s distinct society and the rest of Canada, and the regional tensions between the inner Canada of Ontario and Quebec and the outer Canada of the Atlantic and Western provinces. Through this record of major events in the politics of the decade, 1950s Canada sheds light on the rapid altering of the fabric of Canadian life.