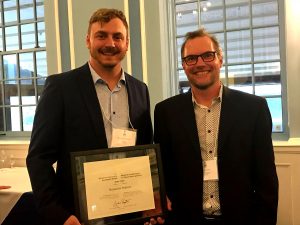 Congratulations to Alexandre Pelletier who yesterday received a 2019 Governor General Gold Medal Award, one of the most prestigious awards that a student at a Canadian educational institution can receive. At U of T, the Gold Medal is awarded to three students who achieve the highest academic standing at the graduate level and was first awarded in 1987.

Alexandre received his Ph.D. in political science from the University of Toronto in 2018 under the supervision of Professor Jacques Bertrand and works on religious violence and ethnic conflicts in Southeast Asia, with a focus on Indonesia and Myanmar. He is currently working on a book manuscript, based on his dissertation, about Islamic radicalism in Indonesia. The book argues that competition among Muslim leaders is a powerful driver of radicalism and that it prevents moderate leaders’ mobilization. He has published some of his work on Indonesia in South East Asia Research (2017) and Development and Change (2016).

Now a SSHRC postdoctoral fellow at the Mario Einaudi Center for International Studies at Cornell University, his postdoctoral project investigates the political economy of “moderate” mobilization against religious extremism in Indonesia and Myanmar. In parallel to his doctoral research, Alexandre has also been involved in various research projects about ethnic conflict and democratic transition in Myanmar. Funded by the United States Institute of Peace and the International Development Research Centre of Canada, he has conducted fieldwork in numerous conflict and post-conflict regions of Myanmar. With his co-investigators Jacques Bertrand and Ardeth Maung Thawnghmung, he has published some of this work in Asian Security (2018) and Nationalism & Ethnic Politics (2017) and is currently working on a book manuscript about the institutionalization of ethnic representation in post-transition Myanmar.