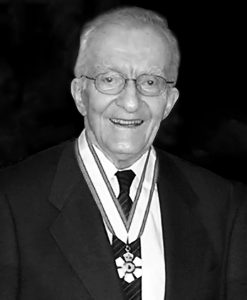 Cranford Pratt (October 8, 1926 – September 4, 2016) Professor Emeritus of Political Science, University of Toronto, passed away peacefully early Sunday morning after an evening surrounded by many of his close family, watching the Blue Jays game. Cran is lovingly remembered by his wife Renate (nee Hecht); his sister Margaret (Peg); his children, Anna, Marcus and Gerhard and their partners Brian Vasoff, Philippa Davies and Bernadette Pratt; and his five grandsons Lucas, Zachary, Simon, Nicolas and Francis. He shared a marriage with Renate for over 60 years and their deep love and caring for each other sustained Renate through her struggle with Alzheimer’s disease during their final years together.

Cran grew up in Montreal and was a scholar who dedicated his life’s work to the study of social justice, and humane internationalism. His wide body of work was infused with his own powerful sense of justice, and he inspired a generation of colleagues, students and international development workers. While a student at McGill he won a Rhodes Scholarship in 1950, and graduated from Balliol College in Oxford with an MPhil. He held academic appointments at McGill, Makerere University (Uganda), and he was a Professor at the University of Toronto’s Political Science department for over four decades. In 1960, Cran was appointed as the first Principal of the newly founded University of Dar es Salaam in Tanzania (then Tanganyika) and for four years he oversaw both the construction of the campus as well as the appointment of new faculty. While marking their 50th anniversary in 2012, three officials from Dar es Salaam University travelled to Toronto to honour Cran for the role he played in creating this important institution.

In 1976 he published “The Critical Phase in Tanzania: Nyerere and the Emergence of a Socialist Strategy”. He was a Fellow of The Royal Society of Canada. In 2004 Cranford was named an Officer of the Order of Canada in recognition of his powerful advocacy for social justice.

The family would like to thank the many people involved in Cranford’s care over recent years at Belmont House, and especially Vione Thomas and Pearlene Leslie. Cran and Renate indicated that in lieu of flowers donations be made to the Canadian Centre for Victims of Torture or the Cranford Pratt/Richard Sandbrook International Graduate Student Scholarship Fund.

A gathering to celebrate his life will be held on Sunday September 18th, 10am-1pm in the Macdonald Room at Belmont House, 55 Belmont Street, Toronto.  Friends and family members will be invited to share their memories of Cran during the first part of the gathering.