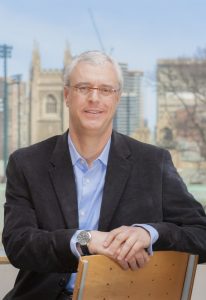 Congratulations to Ran Hirschl who has won the 2021 Stein Rokkan Prize for his book City, State: Constitutionalism and the Megacity (Oxford University Press, 2020).

As the world continues to urbanize at an extraordinary rate, City, State argues that new thinking about constitutionalism and urbanization is urgently needed. It also considers the reasons for the ‘constitutional blind spot’ concerning the metropolis, probes the constitutional relationship between states and (mega)cities worldwide, examines patterns of constitutional change and stalemate in city status, and aims to carve a new place for the city in constitutional thought, constitutional law and constitutional practice.

Of the winning book, the 2021 Prize Jury said: ‘Readers will not think about cities and constitutions the same way after reading this book. The author points out the glaring absence of a place for cities on constitutional law thinking, despite their concentration of the world’s population at this point. The book brings together perspectives from political science, law, and sociology to show the economic and political importance of the city, but then shows equally how cities are systematically diminished when they do not have constitutional authority to protect themselves from politicians in the state and to demand things from corporations who use structural power against them….The book is original, innovative and deeply comparative. It is an example of how a juridical perspective can grasp relevant political and policy dynamics.’ Read the full laudation.

On winning the prize, Professor Hirschl said: ‘This is a great honour. Like many others, I studied Rokkan’s groundbreaking work in my comparative politics courses back in the day. Writing a book of this scope on a vitally important yet understudied topic at the intersection of public law and comparative politics requires tremendous devotion and research. It is very gratifying to receive this prestigious award, with its European and international outreach.’

The Stein Rokkan Prize for Comparative Social Science Research is awarded annually to recognize a substantial and original contribution to the field, in memory of Stein Rokkan, who was a pioneer of comparative political and social science research, renowned for his ground-breaking work on the nation state and democracy. A brilliant researcher and a professor at the University of Bergen where he spent most of his career, Rokkan was also President of the ISSC, and one of the founders of the ECPR. It is a joint prize by the International Science Council (ISC), the University of Bergen and the ECPR. The prize is open to works in comparative studies from all social science disciplines. It is given to a submission deemed by the Jury to be a substantial and original contribution in comparative social science research.

A short video of the virtual presentation of the award is available here: