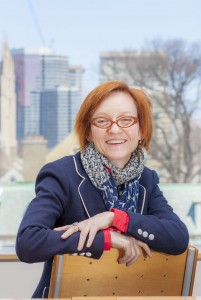 Huge congratulations to our Chair Professor Antoinette Handley, who has been named the Faculty of Arts & Science’s new Vice-Dean of Graduate Education beginning July 1, 2021 for a four year term.

In her recent memorandum announcing the appointment, Dean Melanie Woodin outlined Professor Handley’s impressive academic background in welcoming her to the Dean’s Office. “I am pleased to announce that the Agenda Committee of Academic Board has approved the appointment of Professor Antoinette Handley as Vice-Dean, Graduate Education for a four-year term, from July 1, 2021 to June 30, 2025. I would like to thank Professor Jay Pratt who is serving as Acting Vice-Dean, Graduate Education from July 1, 2020 to June 30, 2021.

Professor Antoinette Handley earned her undergraduate degree at the University of KwaZulu Natal in South Africa and read for her MPhil in International Relations at Oxford University. She earned her PhD in Political Science at Princeton University in 2003 before joining the University of Toronto as an Assistant Professor of Political Science. In 2008, she was awarded tenure and promoted to the rank of Associate Professor. South African born, Professor Handley’s research interests take her back regularly to the sub-continent for her research on state-business relations and the nature of the capitalist class in Africa. Her first book on this subject, Business and the State in Africa: Economic Policymaking in the Neo-liberal Era, was published by Cambridge University Press in 2008. Her second book, Business and Social Crisis in Africa (CUP, 2020), considers how African economic elites respond to key moments of social and political crisis.

Professor Handley has begun work on a new project which seeks to develop a political economy account of state formation in Africa. She has been the recipient of a number of scholarships and research grants including the Rhodes (1993), Fulbright (1998 – she served as the Amy Biehl Fulbright Fellow in that year), SSHRC (2007) and was the World Politics Visiting Research Fellow at Princeton University (2016-17). Before joining academia, she served as the Latin America Research Fellow and then Director of Studies and Deputy National Director at the South African Institute of International Affairs (SAIIA) in Johannesburg, South Africa. Professor Handley has served as Chair and Graduate Chair of the Department of Political Science since July 1, 2017.”