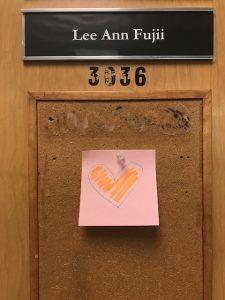 We were deeply shocked and saddened by the sudden passing of Associate Professor Lee Ann Fujii, an exceptionally vibrant and much-loved member of the Political Science community, who died on March 2nd this year, at just 56.

A highly respected scholar of political violence, ethnicity, race, African politics, and field meth­ods, Lee Ann was born in 1962 in Seattle, Wash­ington. Her parents, Americans of Japanese descent, met while interned during the Second World War.

She graduated from Reed College in Portland, Oregon with a BA in Music and from San Fran­cisco State University in 2001 with an MA in International Relations, where her thesis was on the genocide in Rwanda. She spent several years as an actress in San Francisco and worked in the tech industry before deciding to pursue an academic career, graduating from George Washington University with a PhD in political Science in 2006, where she joined the faculty as assistant professor a year later.

Lee Ann joined our department in 2011 and was tenured in 2015. She published widely and with tremendous impact. Her first book, Killing Neighbors: Webs of Violence in Rwanda, was published by Cornell University Press in 2009 and was quickly recognized as a seminal text on an important and difficult topic. The book made at least two critical interventions.

First she was concerned with understanding how social interactions within communities contribute to political violence. People killed people who were their neighbors, their friends, and sometimes even members of their own families. She sought to understand that and to uncover the individual and often highly specific motivations and fears at work in these horrific instances.

Second, her book proceeded from the observa­tion that in this genocide, many of the key ac­tors occupied multiple roles. Many of the peo­ple who served as genocidaires, or perpetrators of violence, in other instances behaved also as “heroes,” rescuing victims from death, hiding potential victims, or in other ways showing kind­ness and generosity. Her work gave us the social context for understanding how such violence, and its associated complexities, unfolded. Her carefully grounded, meticulously researched, granular and community-level research now profoundly shape how we understand what is otherwise unimaginable.

Following the publication of her 2017 book In­terviewing in Social Science Research: A Relational Approach, which examined the methodological foundations for a relational approach to inter­viewing, she was busy working on a new book when she died suddenly. In Show Time: The Logic and Power of Violent Display, she examined how local actors use public displays of violence to alter and affirm social interactions and com­munity membership, examining cases as di­verse as Rwanda, Bosnia, and the United States. Her groundbreaking research was recognized through several prestigious fellowships, from a Russell Sage Foundation Visiting Scholarship (2013-2014) to a more recent fellowship at the Institute for Advanced Study in Princeton (2016-2017).

According to Professor Stephanie McNulty, who remained close friends with Lee Ann since their graduate school days together at GWU, she wove together her acting experience and aca­demic interests seamlessly in her written work. “Both of her book projects were framed in terms of staging and theatrical performance. She re­alized that groups performed violence publicly to send messages and undertake orders. This is just one example of how Lee Ann’s brilliant mind worked. She questioned everything. She care­fully considered why and how things worked before settling on an answer. Often the answer was unsettling but she would not let us escape recognizing the horror and violence inherent in the human experience. She held humanity ac­countable.”

A tireless advocate for greater equity and di­versity in the academy and at this university in particular, she challenged us to think deeply about our own positions in our research and in our teaching. She called out structural rac­ism. where she saw it and modelled in her own professional life what it meant to be reflexive, ethical and committed. Whether in dealings with her undergraduate and graduate students, or in her relationships with her ‘sources,’ she was un­flinchingly open, engaged, and respectful.

Lee Ann was deeply committed to the mentor­ship of young scholars – especially other women of colour. She worked to support and motivate countless young scholars in our department, across Canada and North America, as well as internationally. In the aftermath of her death, it has been a bittersweet experience to hear from person after person how she helped them prepare for a job talk, how she encouraged and cajoled, read draft chapters, assisted with the revision of syllabi to ensure the inclusion of a diverse range of voices, or supported those who were encountering difficulties in their personal or professional lives. It has been quite over­whelming to learn of the many, many lives that she touched. One wonders how she possibly had the time, all the while keeping up her own prodigious research and writing productivity alongside a very full teaching load.

The words of one of her doctoral students Charles Larrat-Smith demonstrate her impact outside the realm of her role as supervisor: “Over the past couple of years, I have random­ly found myself in the company of various es­tablished scholars who work on conflict and violence, and when Lee Ann’s name came up in passing, the reaction was always the same, regardless of the person or setting. Her name alone would be enough to elicit a profound hap­piness from people, happy I suppose because we happened to share such a wonderful person in our lives. That spoke volumes to me about her generous character and sincerity, two traits that are not always easy to find inside and out­side of academia.”

Lee Ann is survived by brothers Carey and Jeff, sister-in-law Jo, and by colleagues and friends from around the world.

Erin Tolley on the “Duck of Minerva” Blog: http://duckofminerva.com/2018/03/remembering-lee-ann-fujii-a-friend-and-a-fighter.html
Toronto Star: https://www.thestar.com/news/gta/2018/03/08/classroom-was-like-a-stage-for-u-of-t-associate-professor-lee-ann-fujii.html
Russell Sage Foundation: http://www.russellsage.org/remembering-lee-ann-fujii
UTM: http://www.utm.utoronto.ca/main-news/utm-mourns-loss-dynamic-professor
The Bulletin Brief posted a 2016 article when Lee Ann spoke to U of T News about her love of research and about teaching her senior seminar on race and violence.
PS: Political Science & Politics